The use of multiple fluorochromes was previously limited by issues arising from the need to switch filter cubes between each single-color image. A ‘pixel shift’ (caused by optical inconsistencies between the individual filter sets; discussed further on the Image Acquisition page of the Microscopy section) contributed to artifacts in the digitally combined image. Additionally, the time it took to switch cubes prevented high speed imaging of live cells and the demand for a new way to image specimens with multiple fluorochromes grew larger. As a result, multiband filter sets were soon introduced, and three distinct filter configurations emerged; each allowing simultaneous/sequential imaging of multiple fluorochromes in the same sample!

One filter configuration is a set including a multiband exciter, multiband dichroic, and multiband emission filter. This configuration is referred to as “full multiband." The image above illustrates the concept of a full multiband set - each filter can be created to selectivly transmit and block multiple bands of wavelengths. This configuration requires the user to use a color CCD camera and simultaneously capture multiple fluorochromes present in a sample with a single image. This ability, however, comes with the cost of being unable to use a monochrome CCD and having decreased optical separation of individual fluorochrome signals due to bleed through between excitation and emission spectra. An example spectrum of a full multiband set is shown below with the corresponding filters color-coded in the cube schematic. 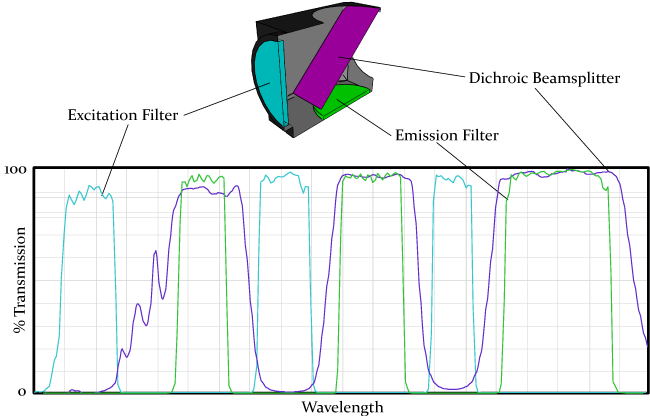 Figure 9: Spectra of a triple-band filter set designed for the dyes DAPI, FITC, and Texas Red® with color-coded cube schematic

The other configurations, known as “Sedat” and “Pinkel” both incorporate a multiband dichroic, however differ in the combination of excitation and emission filters used. The Sedat filter configuration uses both single-band exciters and single-band emitters, while the Pinkel configuration uses single-band excitation filters and a multiband emitter. The S/N ratio achieved while using a Pinkel set is potentially higher than when using a full multiband configuration, although when comparing multiband filter sets, the Sedat configuration will, in most cases, give the highest signal-to-noise ratio. As illustrated in fig. 9 below, it is common to use a monochrome camera to individually capture the emission from each fluorochrome (in this case there are three), apply a false color digitally, and overlay them to get a final image when using any multiband filter set. 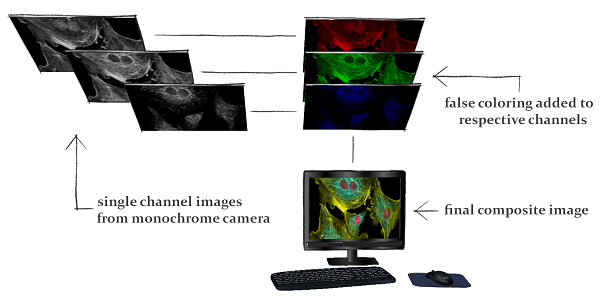 Other optical filters can also be found in fluorescence microscopes: 1) A heat filter, also called a hot mirror, is incorporated into the illuminator collector optics of most, but not all, microscopes. It attenuates infrared light (typically wavelengths longer than 800 nm) but transmits most of the visible light. 2) Neutral-density filters, usually housed in a filter slider or filter wheel between the collector and the aperture diaphragm, are used to control the intensity of illumination. 3) Filters used for techniques other than fluorescence, such as color filters for transmitted-light microscopy and linear polarizing filters for polarized light microscopy, are sometimes installed.