Chroma, a Bellows Falls company that makes optical filters for the biomedical industry, is trying to hire more staff to handle a surge of orders from companies developing Covid-19 testing.

Like many companies, Chroma Technology Corp. in late March asked all employees who could do their jobs remotely to do so in an attempt to minimize the spread of the Covid-19 virus. But the company still has more than 70 people working in production in Bellows Falls and a subsidiary in Williston, said Chief Financial Officer Newell Lessell, who is due to take over as CEO on May 1.

Lessell said orders for the company’s optical filters – which are made in the Bellows Falls production facility – have been pouring in since the scale of the Covid-19 virus pandemic started to become apparent in February. The filters are widely used in testing for the virus.

“This initial surge is customers primarily with whom we have done business at some point in the past, who now need far more of these filters by orders of magnitude than they have previously,” Lessell said. And “we have people approaching us now for whom we have not produced before, so we need to work with them to design filters to meet their needs.”

“Frankly at this point, the key thing for us is identifying ways we can increase our output,” Lessell said. “That’s what we are working on.”

Chroma is one of many Vermont companies that have seen demand for their products rise as a result of the coronavirus outbreak. Dozens of other Vermont companies have changed course to work on making ventilators or protective equipment.

“Wherever there is change, there are opportunities,” said Michael Metz, the director of the Generator, the Burlington maker space, who has turned his own nonprofit over to the manufacture of face shields for health workers. Creating the masks won’t make the Generator a profit, but it will enable the business space to avoid staff layoffs, said Metz.  “Whether the change is good or bad, there is hardship for sure, but there are opportunities.”

For Lessell, adding staff during the Covid-19 crisis is complicated by a number of factors. Although thousands of Vermonters have lost their jobs as a result of business closings, Lessell said that in order to protect the production staff from the virus, he’s leery of bringing new people into the plant.

With that in mind, Chroma has been reaching out to its own workers and asking them to see if any members of their household would be interested in a temporary position at Chroma. Some positions don’t require much training or experience.

“From an infectious disease perspective, it’s a little less risky because these are folks who are already in the household,” Lessell said.

Some Vermont employers have also expressed worries that workers will choose to take state and federal unemployment insurance – which could top $1,100 per week for several weeks — rather than stay on the job.  Lessell said he didn’t think that would happen at the employee-owned company, which pays 100% of individual workers’ health insurance. Nobody at the company makes less than $40,000, he said, and Chroma’s profit-sharing plan nearly doubles that salary. Chroma is a certified B Corp.

“We pay quite well,” he said. “Our paradigm is we want to be paying at least a living wage.”

Chroma’s founder and longtime CEO, Paul Millman, recently announced he is stepping down from his position. His official retirement date is April 30, and Millman, who started the company in 1991 with five others, said he has been spending his work days at home. He said orders to Chroma started to increase sharply in the end of February from all over the world. Many high-tech companies like Chroma, even those that haven’t worked in the biomedical field, are now looking for ways to help create testing devices, he said.

“At this point in time, even semiconductor companies are being asked to get involved, because they know how to do large-scale manufacturing,” Millman said. “Someone else designs it. Knowing how to manufacture on a large scale is a skill.”

Chroma’s filters are made in a clean room setting. The company has changed its shifts to minimize the number of people who are in the building at the same time.

“That said, we’ve had to double down on cleaning,” said Lessell. “It’s a moral imperative, a business imperative that we have to stay healthy in order to keep producing.”

The company has also made accommodations for workers who are particularly vulnerable to the virus, such as those whose immune systems are compromised, by creating an overnight shift on the weekend.

Lessell said he expects the company to continue its rapid production growth over the next few months. He noted that the company has grown all but two years since 1991.

“We’re fortunate that the markets we serve and the larger photonics industry is growing very rapidly anyway, apart from any of this,” he said. “There are a lot of things outside of the biomedical field that drive demand for filters right now,” such as navigation in automobiles, LIDAR, drones, and high-spectral imaging.

“The crisis of the moment, as opposed to crop management or virtual reality — those customers are important to us, but in terms of what feels to us like the moral imperative, it’s the fight against this pandemic right now. There’s a timeliness issue to that.”

And while the surge in business is only expected to last for several weeks, Metz noted that he expects manufacturers to continue seeking more reliable sources of raw materials long after the crisis has passed.

“I think it’s going to change our attitudes about the security of global trade,” said Metz of the pandemic and the supply problems experienced by health facilities and manufacturers nationwide. “If I am making ventilators, I am not going to source 100% of my production out of China. I’m going to take a hit on the price” and obtain materials from a more diverse array of places, including Europe and the U.S., he said. 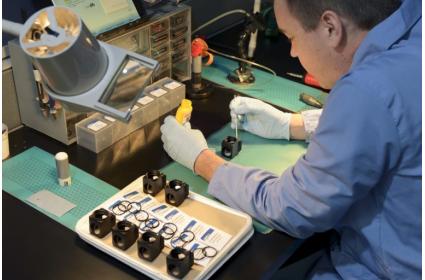 If you are a member of the press and can’t find something you need—or want to speak with someone from Chroma please contact us at sales@chroma.com.

Millman Stepping Down After 29 Years at Chroma Technology